The Trend of Superimposing Wedding Pictures 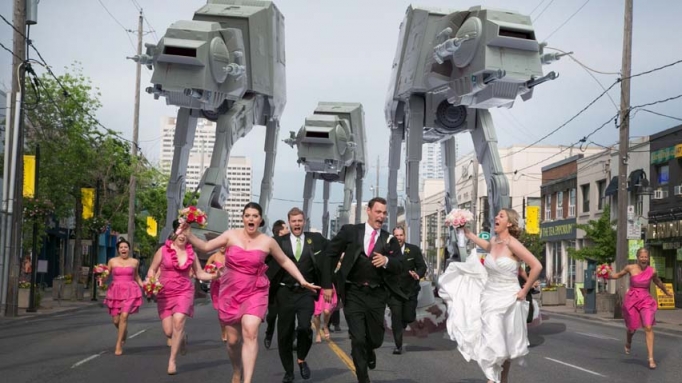 Recently, we’ve been hearing a lot about the Toronto couple’s who’s wedding has gone “viral.” The image, see above, has some Star Wars characters superimposed and chasing them down the road. The couple and their bridal party are, of course, running for their lives.

This photo has gained media attention and has become the newest trend in  wedding Photography, or so it would seem.  It reminds me of the 1980’s and 90’s when couples were superimposing Disney cartoon characters into their wedding videos.  During that time, it was the most realistic thing one could do with wedding videos and some couples were really into it.

This kind of wedding imagery is not new, it’s a copy from something that was in the media but wasn’t so successful in terms of the media coverage.  It was a copy of Quinn Miller’s T-Rex Image published just a few weeks earlier. 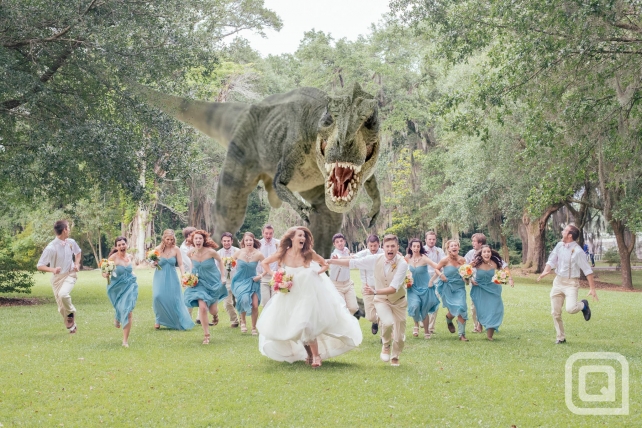 So what’s my take? Well it seems like the media are desperately looking that something “new” – honestly, I would rather get this kind of photo when I get off a ride at a theme park (you know those candid images we all love to look at but hate to buy).

If you were to look at this image in 30 years, this image wouldn’t tell you about the place, the moment, the couple, the time. When I spoke with Michael about this, he had a great idea. Why don’t we create an app for couple who’ll want to add that little extra something to their photos. In the app there will be a choice of creates like giant chickens, Aliens, Giant babies, Star Wars characters, Disney character, heck… we’ll even throw in some HALO characters just for fun. The couples could upload their wedding photo and they could just add these crazy characters to the image. Every update would include more creatures and characters, version 2.0 will have insects and vegetables, and version 3.0 will include the option of turning everyone into zombies.  Now that’s a business! Or is it?

As you can image, Michael  and I don’t necessarily think this is elaborate and deep work. It’s not elaborate even from a great Photoshop perspective, because a Photoshop artist would have created something that tells so much more and it would be more fun. For the photographer, it’s just a quick and easy way to make a quick buck and get a few hundred “likes” and re-tweets.  For the couple, it’s to make their wedding a little different and unique. And the more viral this image gets, the more important the wedding will be? Not really.

Yes, everyone has flowers and dresses and first dances and vows, but not everyone has a dinosaur or Star Wars Characters chase them, so again… it makes the wedding better in some way? Well at least I hope the couple feels that way. I hope the couple blows up the image and puts in on their wall. I hope they look at that image everyday and say, “yes, this was us, and this is such a perfect representation of the time we had at our wedding, remember when T-Rex had the awkward run in with Aunt May, yes that was classic!” Ok, I went a little off on that last part, but you know what I mean.

At the end of the day, this kind of imagery is not about photography and all about the business and the couple’s own intentions of wanting a crazy quirky photo, which ultimately, deserves a merit of its own.